The man confident enough-to leave his wellingtons in the boot is WALTER McINTYRE*, who discusses the theory and reality of water-flow in channels.

The hydraulics of surface drainage channels concern the application of theoretical formulae to practical situations. Getting the right answer is more important than mere mathematical nicety and the avoidance of occasional inconvenient flooding of the area to be drained. For when surface drainage channels fail to achieve their hydraulic design performance there is often the potential for the resultant flooding to cause damage to both property and contents.

Whilst these occurrences do not affect my own company directly, they do little for the reputations of hydraulics engineers and drainage manufacturers in general. And they are all the more regrettable since they are avoidable.

If change is to come, it requires acceptance of the fact that the principle of using simple pipe or open channel formulae for the calculation of the drainage capacity of surface channels currently in general use – must be strongly disputed. It has inherent errors that could lead to the channel drainage capacity being over-estimated by more than 100%. 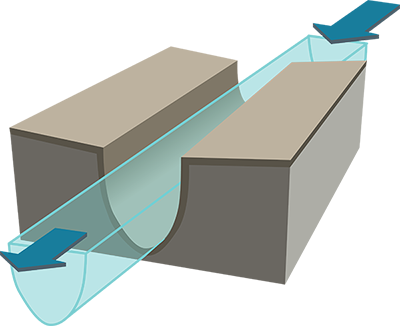 Chezy’s work around 1775 was one of the earliest attempts to provide a scientific basis for channel design. The shortcomings of his equation:

resulted in the development of many empirical formulae in the later half of the last century and the beginning of this. Since then Reynolds number has become available to represent the relationships of the many variables inherent in pipe and channel; Karman and Prandtl have published theories of turbulent flow; experiments on smooth pipes have been recorded by Stanton and Pannel, and on artificially roughened pipes by Nikuradse. All added to the knowledge of the physics of fluid friction that were used by Colebrook and White to derive an equation describing the frictional resistance of pipes.

Of the many formulae offered, the Manning (Strickler in Europe):

which includes resistance co-efficients, has become the most popular. It is easy to use and the results can be readily represented in graphic form as design charts. However, it still has severe limitations. In the introduction to “Charts for the Hydraulic Design of Channels and Pipes” the publishers, the Hydraulics Research Station, Wallingford, state: “Most empirical formulae are based on limited data, and, as in general they have no sound physical basis, extrapolation outside the range of experimental confirmation may lead to serious error.”

That is, the assumption is made that the flow in the channel is uniform and that the fall of the channel bed, water surface and energy gradient are parallel. The simple fact is that there are many variables and some, if not all, the assumptions can be incorrect certainly with respect to channels accepting water laterally (and which may, or may not, be of uniform inflow).

Read more about steady uniform flow and why it’s a flawed approach for trench drains. 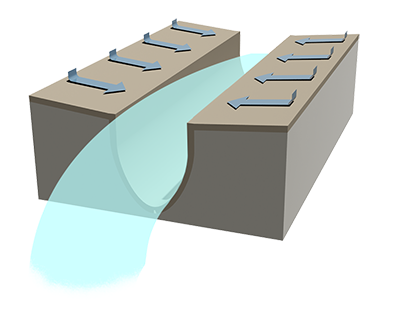 Engineers at this company investigated some 12 to 15 years ago and subsequently devised – in conjunction with Professor Dr-Ing Ulrich Zanke of the Hydraulics Institute at the FH Kiel/Eckenfoerde, West Germany – a computer program to show exactly what happens to fluid in a channel. The theory was developed on the basis full-scale laboratory tests undertaken at the time.

The basis of the theory is that the level of water flowing in a channel does not remain constant but falls towards the discharge point. It then follows that if the water surface at the discharge point is lower the velocity at that point must be greater.

What the engineers confirmed was that the velocity of water flowing in a channel varies continuously along a given length, being at its greatest at the discharge point and its least at the upstream end of the channel (Diagram: note improvement in both capacity and velocity in a channel with a sloping bed compared to a level channel of uniform depth). 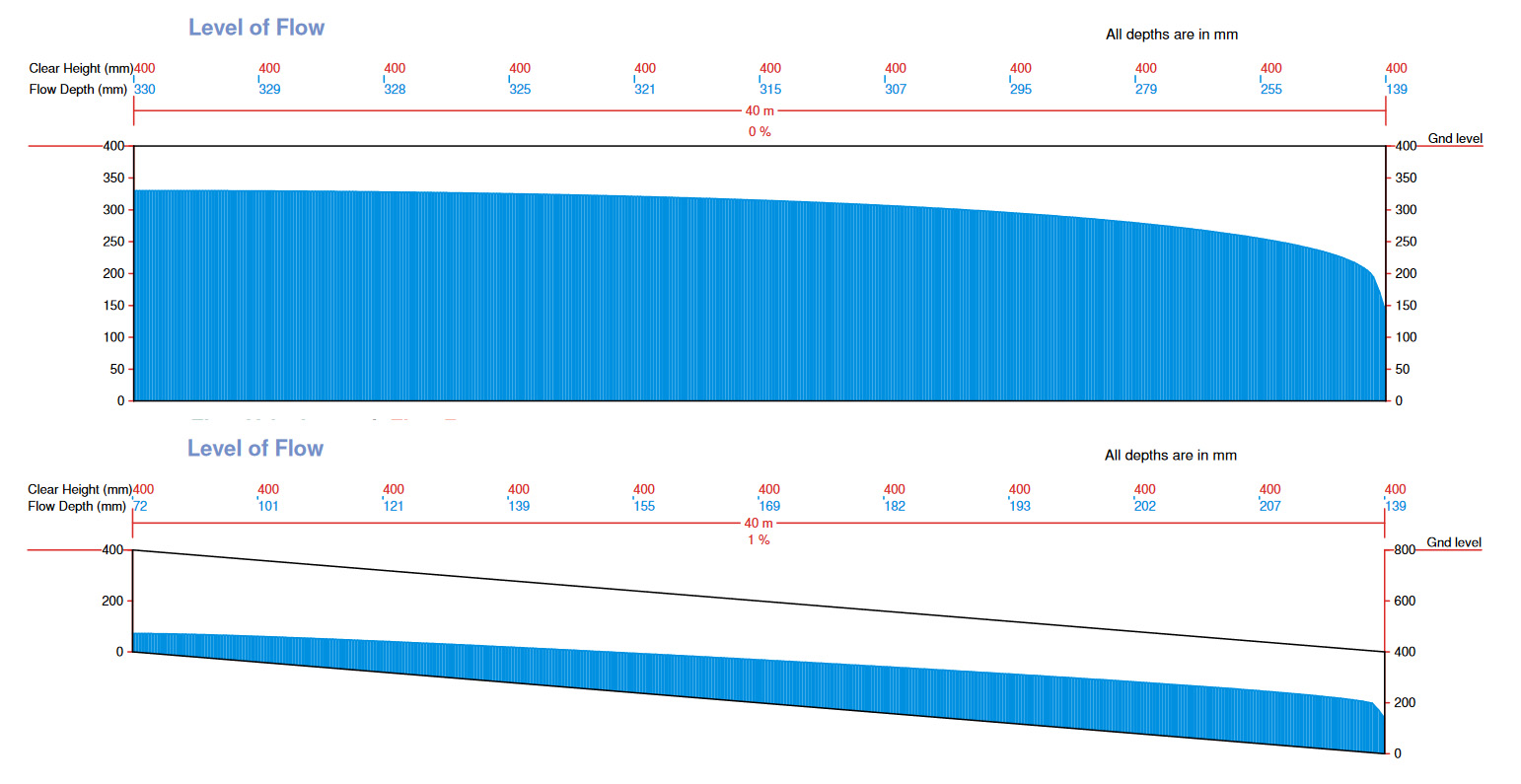 See graphics on steady, non-uniform flow showing how the liquid height varies in channels and the subsequent impact run length has on a channel’s capacity. ACO channel hydraulics are, as a result of non-uniform flow, therefore based on differential, equations and not on the steady, uniform flow formulae. It is, perhaps, neatly summed up by attempting to use the simple formulae provided for steady, uniform flow to calculate the rate of flow in a channel laid level (or nearly level).

it can be seen that as the gradient tends to ‘0’ (ie flat) the result of multiplying the other terms of the equation by zero produces zero velocity which means no discharge. But water does flow in a channel with a level bed – the proof is all around us – as roof gutters (which are for all practical purposes laid level) show!

By contrast the complex formulae used in ACO channel hydraulics not only acknowledge the reality, but also accurately predict the rate of flow in any given situation. It is only when channels with uniform cross-sectional area and laid to steep gradients are considered that simple and complex formulae come together and provide similar answers. In surface drainage, however, channels laid to such steep ground slopes are rarely encountered.

The principle of non-uniform flow also calls into question the concept of self-cleansing velocity. The self-cleansing velocities in British Standard 8301 are frequently quoted in respect of drainage channels but that standard is really intended for underground drainage pipes laid to substantial falls and not channels laid flat or to a slight fall.

The ACO theory and experience indicates that the one metre per second flow rate required for self-cleansing is generally achieved only in the last 10-20% of the length of the channels flowing at full capacity. Claims for level channels to be self-cleansing along their entire length must be viewed with considerable skepticism.

Walter McIntyre was a long standing employee for ACO in the UK. Sadly, he passed away in September 2015.
Walter was the consummate professional engineer with many years of civil engineering experience and he was held in high regard by those who knew him and I for one, learnt a great deal from him.

The article above is a slight modification to the original article published in the UK.  I have added additional detail through the popup links.

askACO to propose the correct size drain for your next project